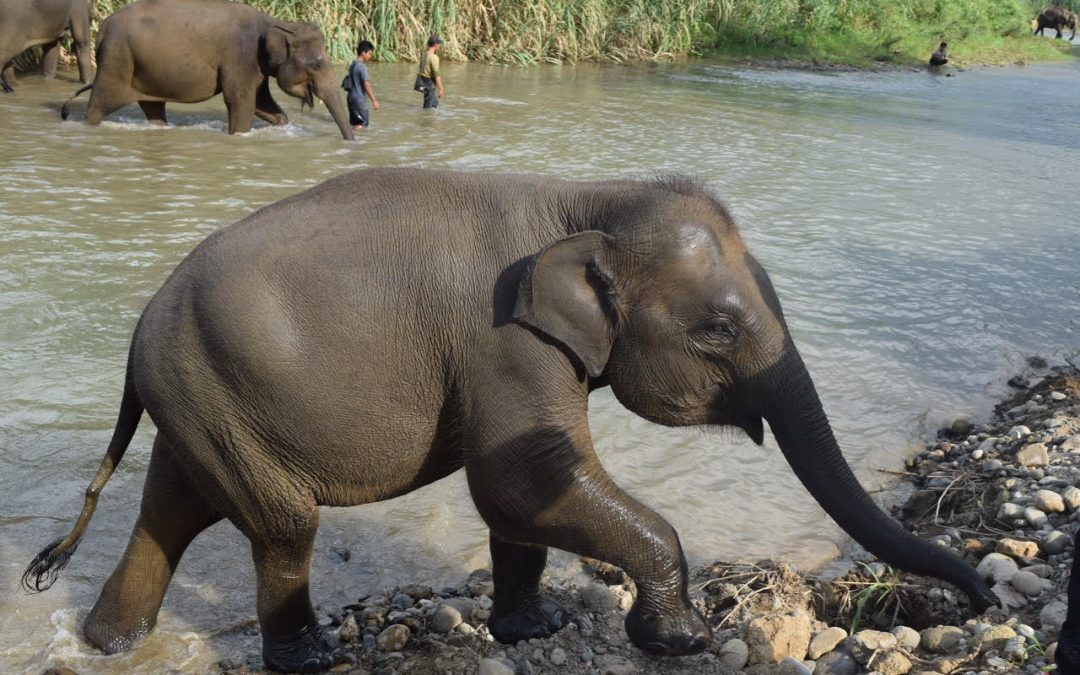 In the past, there were many wild elephants to be found on Sumatra. Elephants often caused problems for the local population, because they destroyed rice fields and ate the harvest. Instead of chasing elephants, they are now trained to work in the forest and to be a tourist attraction. When the Sumatra railway was built from 1880 onwards, and direct telegraph poles were placed next to the rails, it turned out that many of these poles were pulled out of the ground almost immediately. This shows that in those days many elephants stayed in and around the Gunung Leuser area.

The Sumatran Elephant In Tangkahan

Today, the Sumatran Elephant is almost extinct. Only in a few places they can still be seen in their natural environment. Most elephants can be found in the elephant training center in Way Kambas near Bandar Lampung in South Sumatra. In addition, the elephants can also be seen in Tangkahan in North Sumatra. In Tangkahan, at the edge of the Gunung Leuser reserve, lies in an impressive jungle area where beautiful jungle treks can be made. In addition, the World Wild Life Fund keeps elephants that can be seen and washed.

Book an exclusive tour to see the Sumatran Elephant with Tri Jaya Tour & Travel. Ask us about the possibilities and prices.

The Sumatran tiger and elephant in literature

In the 1920s, former governor Westenenk of the East Sumatra district published a book named Waar Mensch en Tijger Buren Zijn (Where Man and Tiger are Neighbours), in which, besides extensive stories about the Sumatran tiger, he described elephants who were in these years to be found all over Sumatra. The following quote is from his book:

‘Just at the moment when she reached for the durian fruit, along the tree, something which looked like a giant snake came down and approached her. She looked up and saw that it was an elephant trunk. The naughty eyes of the elephant seemed to be lighting up, and subsequently she began to see another animal and one more.. Without knowing it she had wandered into a herd of elephants… She began to scream out of fear which in turn shocked the elephants and sparked a thundering chaos. In the kampong, the children suddenly scared up and everybody was shocked and silent…They followed the herd.. deep in the mountains they heard the well-known roaring and falling of trees…. The herd passed by and at a short distance from the herd.. six cows appeared. A young bull with little ivory; sociable ear flapping and with deep, sounds, the company slowly strolled along…’

From Medan, it is about 6 hours driving to Tangkahan. It is not possible to return to Medan the same day. We can arrange a simple accommodation for you in Tangkahan. Contact us and ask for the possibilities and prices so that we can organize this unforgettable trip for you.